Some random thoughtful/funny bits I collected over the years, and some pure entertainment

Introduction to Abject-Oriented Programming, a non-recent but all too timeless masterpiece about coding... and coders

My favorite episodes of xkcd, a webcomic of sarcasm, geekness and language:

Plug and Play is not dead. If you're nostalgic about Y2K-era PC stickers, here's my own sticker about its evolution, which lives on in every PC running Windows: 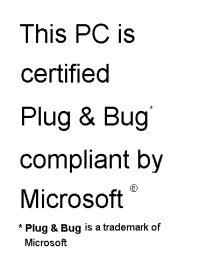 In French, the colloquial verb 'to bug' means software is misbehaving due to a software bug.

Rollo May wrote:
The Opposite of Courage Is Not Cowardice; It Is Conformity.
Jean-Jacques Rousseau wrote:
If, in spite of all this, the project remains unrealised, that is not because it is Utopian; it is because men are crazy, and because to be sane in a world of madmen is in itself a kind of madness.

A Lasting Peace through the Federation of Europe and The State of War, mid 1750s

Walt West wrote:
The trouble with doing something right the first time is that nobody appreciates how difficult it was.

Wojtek Borowicz: You have also spoken in less than favorable terms about other trends that have emerged in software development, like microservices and serverless or Test-Driven Development. Are there any trends in software engineering that you actually find appealing?

David Heinemeier Hansson: That’s a tough question. It’s much easier to pick out all the shit that I don’t like.

Adriaan de Groot wrote:
As Johannes Zarl-Zierl already said: the general advice when drafting a new Open Source license is "don't". More specifically, "don't".
Goswin von Brederlow wrote:
This really reminds me of the Windows world: You have moved your mouse. This change will only take affect after a reboot. Reboot now?
Otavio Salvador wrote:
Microsoft gives you Windows ... Linux gives you the whole house.
Popular wisdom (via Tollef Fog Heen) wrote:
UNIX is user friendly, it's just picky about who its friends are.