On the cover of the May issue of Canadian magazine L'Actualité, I read "LE BITCOIN POUR LES NULS" ("Bitcoin for Dummies"). One of my first reactions was "true". In fact, it announced an article trying to explain what "cryptocurrencies" are, titled "Bitcoin, la monnaie que personne ne comprend" ("Bitcoin, the currency which no one understands").

I find that title interesting in that those who "own" Bitcoins surely do not "understand" it. But it seems to suggest Bitcoin can be understood. As I expected, the article didn't directly tell readers to "buy" "cryptocurrencies". It warned about weaknesses. But as I expected, it overall suggested that "cryptocurrency" had value, just perhaps not as much as some claim. The article even quotes a guy trying to make a living by selling "cryptocurrency" claiming that we can't miss out on "this type of asset[sic]".

It seems that with the current hype about "cryptocurrency", the critical view no longer has as much prominence as the view of scammers/enthusiasts. In fact, it seems the critical view doesn't have any room left. So I thought it was time for me to intervene.

I couldn't decide which definition of "cryptocurrency" was best, so here are a few.

What is "cryptocurrency", really

While this may seem obvious to economists, this has gotten less intuitive to the average developed world citizen, with the growth in types of intangible assets. Many intangible things have value. Patents, texts and other intellectual property are intangible, but can have value. And many without financial knowledge would even consider all stocks as intangible. Moreover, most real currencies no longer have intrinsic value. But even though paper money has negligible physical value, representative money, in the broad sense, has value, relative to the issuing government(s).

To be fair, some immaterial alternative currencies have tangible backing. One of the most notable cases is the Toronto dollar, created in 1998, which has fixed exchange rates with the Canadian dollar, and which is backed by the Family Life Foundation of Willowdale.

Except that in fact, the Family Life Foundation of Willowdale (now just "Family Life Foundation") is a small religious organization. When the Toronto dollar's hype fell and honoring the exchange rate became more costly than sales generated, the Canadian "charity" obviously stopped honoring its guarantee, and 15 years after its creation, the currency lost its only backing. Therefore, those who had bought or accepted Toronto dollars are now stuck with a "currency" which - of course - nobody wants anymore.

While the exchange rate being lower for sale than for purchase made it obvious from the start that the currency was more targeted at faithful souls than at investors with the slightest hint of judgment, it is now obvious to even the wishfulest thinkers that Toronto dollars have no value. Has the issuer apologized for the 100% loss of its customers? Apparently not, since the website of the Family Life Foundation no longer even refers to Toronto dollars. It even gave up (if it didn't sell) its domain to an even more doubtful entity using it to boost its sales.

Will those who created Bitcoin apologize any more when the Bitcoin crashes? No. And there are several reasons for that:

But, theoretically, reliable entities could strongly back a cryptocurrency, giving that currency some value. I insist on "theoretically" and "reliable". A corporation which creates a "cryptocurrency", claims some guarantee and then tries to sell the first units is not a reliable entity (or, in other words, the value given is proportional to the reliability; such an unreliable corporation would not provide significant value).

If you still think a "cryptocurrency" might have value, the main question you should ask is "What is that value?" And the simplest way to answer that is to ask yourself not for how much you could re-sell it, but what you could buy with a unit of that "currency". And - if you want a more precise answer - what you could buy with that same unit in 1 month, 2 months, 4 months, etc. If the answer to all of these questions is "Nothing", then the value of that "currency" is null (unless you are confident that there will be irrational market participants willing to pay something).

A quick search turned up surprisingly little material debunking "cryptocurrencies" (although perhaps I am not alone feeling a bit bad treating the subject, fearing to give it even more unwarranted publicity). The main document I found is David Golumbia's Cryptocurrencies Aren’t Currencies. They Aren’t Stocks, Either, which does a good job debunking propaganda used by many "cryptocurrency" merchants.

If my understanding of "cryptocurrency" believers is correct, the error they make is to think that since national currencies are imperfect, it's OK for "cryptocurrencies" to be imperfect. Imperfection is comparable to imperfection, isn't it? The simple appearance of a second "cryptocurrency", and then of a third, and then... of countless more, and the fact that anyone can create its own, should have made it obvious that "cryptocurrencies" were worthless, but it didn't for many. In good part because there had already been numerous currencies for centuries, legitimately.

If I decide that my house's land secedes from Canada to form a new "Filipstan" country, on a 2500 m² surface, against the will of all Canadians but my own family, that I have no army nor natural resources, even if I claim that Filipstan taxes will be collected in "Filipoin" and Filipstan emits 1010 units of its own "Filipoin" currency on the first day of independence, you should probably not pay much more than its melt value to buy a Filipoin. But, if there's any chance that Canada does not annex Filipstan on the next day, Filipoin will still be worth more than any cryptocoin (theoretically, not marketingly). At least, it will have some backing.

National currencies are problematic. But trying to create a better currency won't be possible without backing that currency, whether or not that currency is humanitarian, multicultural, multilingual, secular, non-partisan, cryptographic, fractal, recursive or whatnot (apologies to those who were about to launch a fracurrency - better luck next time!).

If you've "invested" all your fortune into buying (or "mining") "cryptocurrencies", don't despair. Peak Crypto is hopefully behind us, but you most likely still have plenty of time to sell to a better believer than you are, per the Greater fool theory.

If you were considering to "buy" "cryptocurrencies" though, realize that not losing means you will have to find someone as foolish as you are. It's a zero-sum game in which entry requires actual money or energy, so if you want to avoid losses, you'd better excel in technical analysis.

"Cryptocurrencies" may be an ecological disaster and worthless, but I think the phenomenon they created teaches a valuable lesson to learn when they can claim more than 300 billion euros in "market capitalization", even though it has been nearly 10 years since they were introduced and several exist.

When I was a kid and my mother refused to buy me some toy, I countered her argument about lacking money saying that she could just use her plastic card. Eventually, like most people, I understood that for representative money to be valuable, it needs scarcity.

What few ever understand though, is that a currency stores value. And having followed a university class introducing macroeconomics, I must say this is no surprise. The class treated central banks, and explained how private banks "create" money. But it never explained how backing affected a currency's value.

Our reaction to the cryptocurrency phenomenon should not be to prohibit alternative currencies. While we should try preventing sales of alternative currency to minors, if adults want to hope that the "currency" they believe in will become the future's global currency, we should not prevent them to put their wealth into getting a share of that dream any more than we prevent people from financing any religion. We could mandate cryptocurrency sellers to warn each buyer that any currency's value is proportional to its backing, but we live in a free market where mentally mature and sane individuals should be free to pay what they want for things they want, no matter how worthful - or worthless - they are. People buying alternative currencies are not hurting others, and not even literally hurting themselves. People "mining" are not necessarily hurting anyone, and if they do by consuming dirty energy, the negative externalities should be compensated by regular tax disincentives.

We should not prohibit Bitcoins, Litecoins, foocoins or the next clever scheme alternative currency makers come up with. In part because that would be pointless; there is an infinity of worthless things we can create. And in part because some complementary currencies could be valuable if they had significant backing. What we should definitely ensure is that people who study macroeconomics, and ideally not only these, get an understanding of how actual money stores value.

I retracted some of the following updates in a 2022 post. Apologies

This article's publication marked the end of Peak Crypto. Now that the hype is well over, it is time to "sell" your "cryptocurrency", if you still haven't done so.

The hype is really over, now that The Economist acknowledges "cryptocurrencies" are useless. Hurry!

While "cryptocurrencies" keep crashing, nuance about their worthlessness is getting more important. 2 "stablecoins" have appeared, "stablecoin" being another clever marketing term to suggest that a cryptocurrency's value will be stable since it is pegged to a stable asset - in these cases, the USD. The guarantee of convertibility is simply provided by the private company which issues each one of these "currencies", but the Gemini dollar is regulated by the USA and seems to have a guaranteed value of 1 USD.

Another cryptocurrency with a guarantee from a state was launched in February - Venezuela's petro, which is directly backed by natural resources of the country. However, the petro cannot be "mined", and appears to be a scam from the government to help alleviate Venezuela's financial crisis, nearly as worthless as traditional "cryptocurrencies".

With the Bitcoin fever over, Axios has published graphs putting Peak Crypto in the first half of 2018.

Bitcoin and its brothers are getting more prominence in shops. Will "cryptocurrency" owners soon be able to use their "currency" as such? No such luck... the shops won't accept it, but they'll "sell" it. Next to other "goods" with a clear value, such as tobacco... at least, tobacco buyers can feel a little less guilty about wasting their money now, by simultaneously "investing" in another poison.

Ah, the Ultimate Irony... "Cryptocurrency": the pseudo-currency which no one understood and which stores never accepted... but sold! Yep, even with its contradiction now exposed in broad daylight

I spotted such a crhypeto shop... on my way back from work! 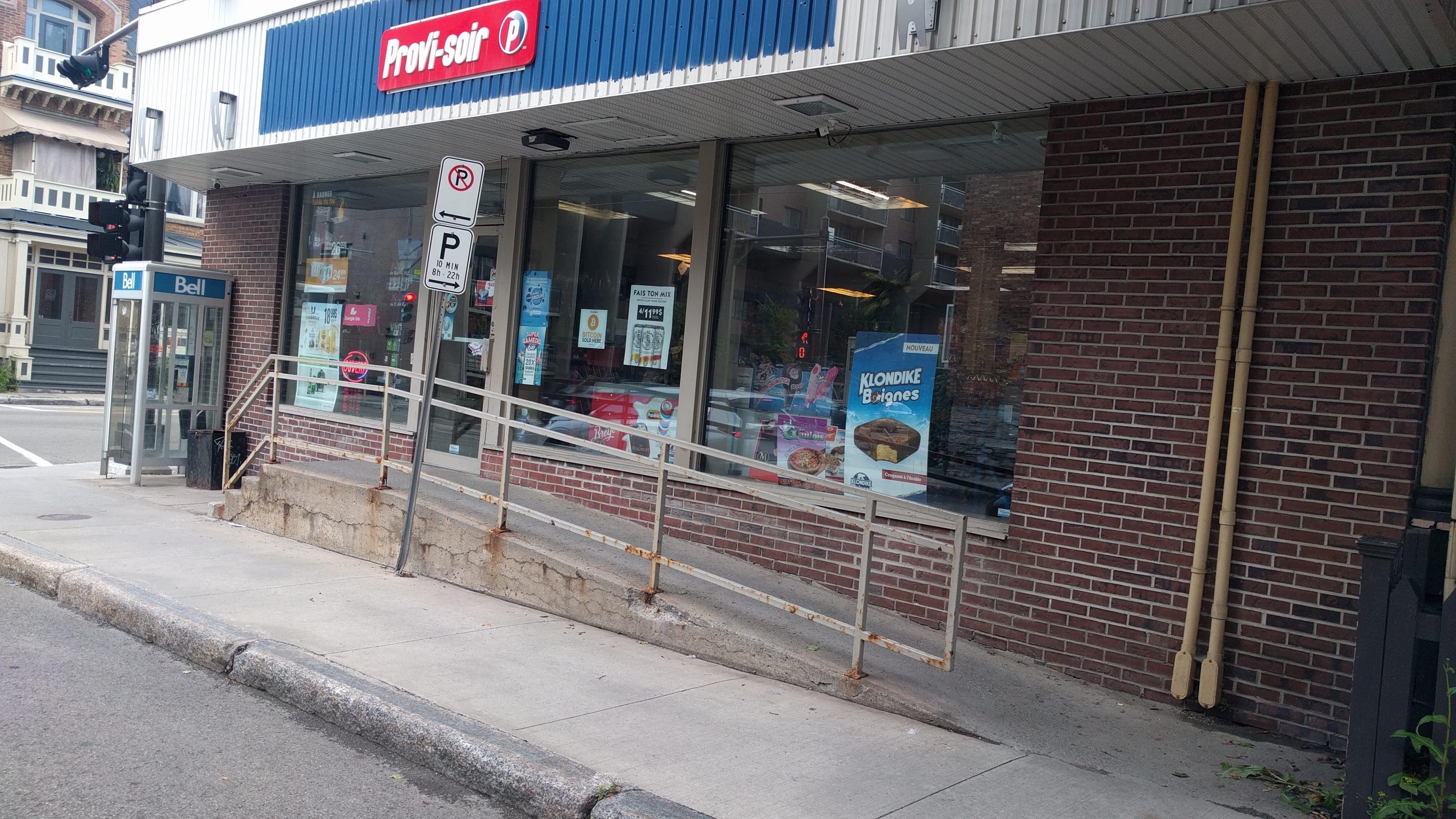 Tough choice - how to choose between Bell's public telephone and this major Quebec convenience store chain's crhypeto offer right next to it? 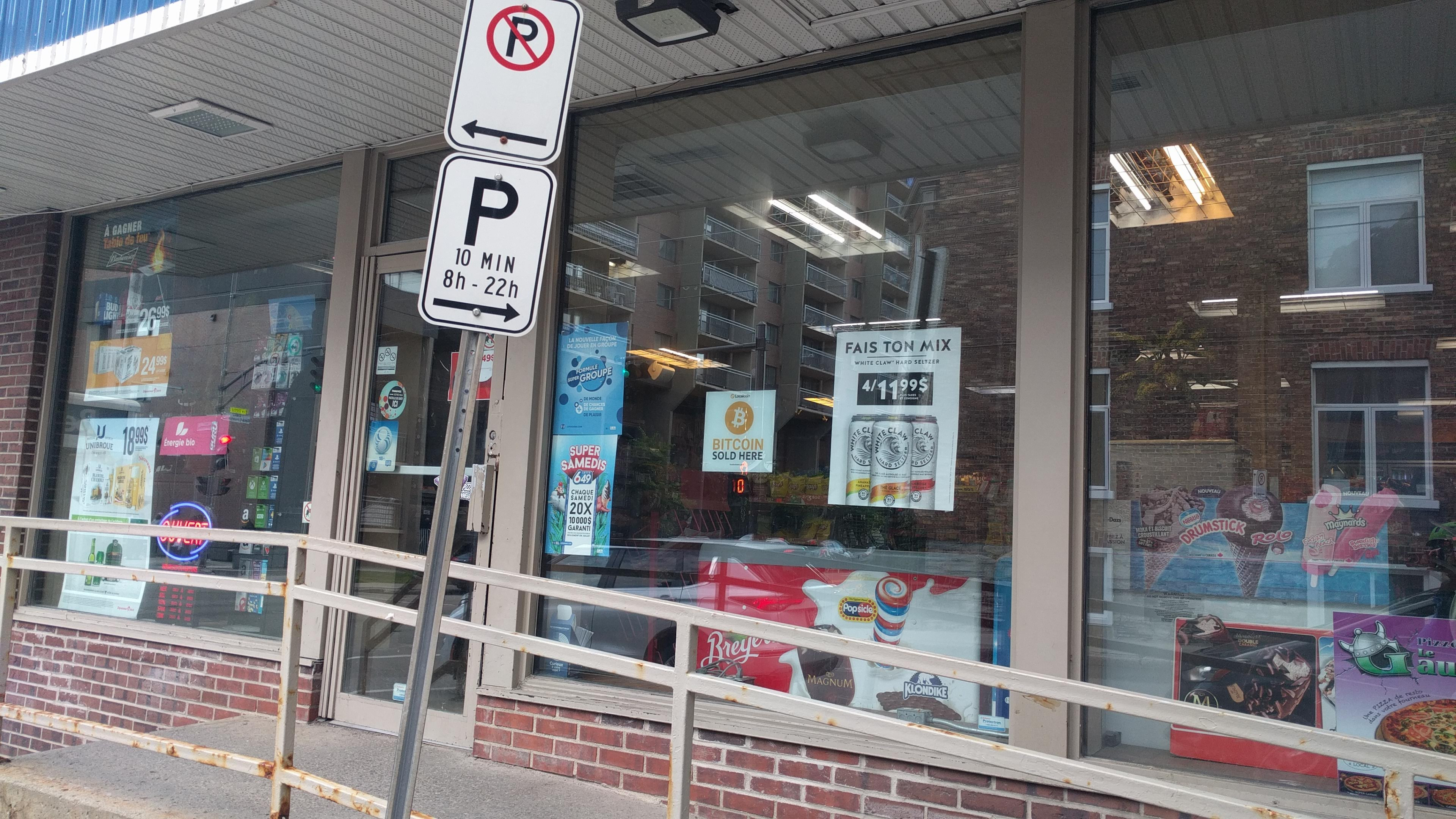 This poor store even felt such a great opportunity to defraud its customers was worth a violation of Quebec's language laws.
Permalink: https://philippecloutier.com/blogpost83--Cryptocurrency-the-pseudo-currency-which-no-one-understood-or-accepted-but-which-many-bought